1 Pager settings
Find out more about the Whaka 100, how we became the Southern Hemisphere's largest mass-participation MTB event, and the community behind it.

What’s in a name? Everything. We’re passionate about our local history and keen to share that with all who visit and take part in our events. The forest is our local treasure, and ensuring it’s respected as well as looked after is critical to not only us and our communities, but also our events

Inspired by the strides of the Rotorua Lakes Council and others to go bilingual, we’re also on our own journey to get there. It’s step by step, but we’re on our way. As such, we thought we’d share how to correctly pronounce the event name - Whaka 100.

Whaka is short for the name of the forest our event calls home, the Whakarewarewa Forest. The full name is pronounced ‘fahka-reh-wa-reh-wa’, with the r’s pronounced as similar to a rolled r. Check out pronunciation on the excellent maoridictionary.co.nz.

But this is where the confusion lies. The local dialect pronounces the shortened Whaka as ‘waka’, which the event has adopted since its inception.

“The 'Faka' is and has never been pronounced, only ever the 'Waka' type, therefore, 'Faka' is incorrect.” says Takuta (Dr) Anaha Hiini of Kōtihi Reo Consultants. “The 'F' sound only comes back in when the longer version Whakarewarewa or the full version Te Whakarewarewatanga-o-te-ope-tāua-a-Wāhiao is pronounced.”

​The full name of the forest,  Te Whakarewarewatanga-o-te-ope-tāua-a-Wāhiao, means 'the uprising of the army of Wāhiao' which you can learn more about at Whakarewarewa Village and Te Puia.

So, you’re right for saying ‘waka’ and if you said ‘faka’ you’d be doing the right thing by pronouncing the ‘wh’ as expected. We encourage you to pronounce the full name Whakarewarewa correctly.
​
We're excited to be working with local Māori stakeholders on our te reo journey and hope you’ll join us.

The inspiration
From the ‘hero dirt’ to the quality and quantity of single-track, no other event comes close to delivering trails and terrain like the Whaka 100. Founded in 2007, the Whaka 100 has created a growing reputation as the toughest MTB marathon in the Southern Hemisphere.

With an ever-evolving course and fresh challenges each year, the ‘competitor-first’ mindset means that every innovation is designed to create a better experience for the riders, from first-timers to world champions. 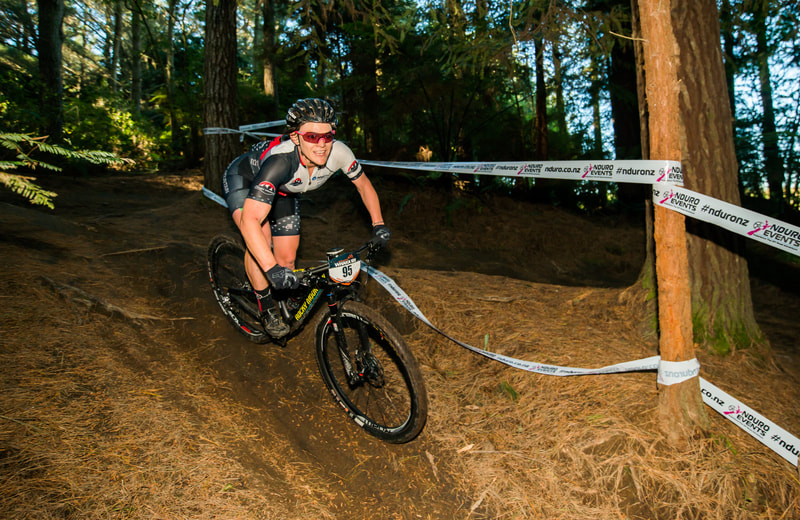 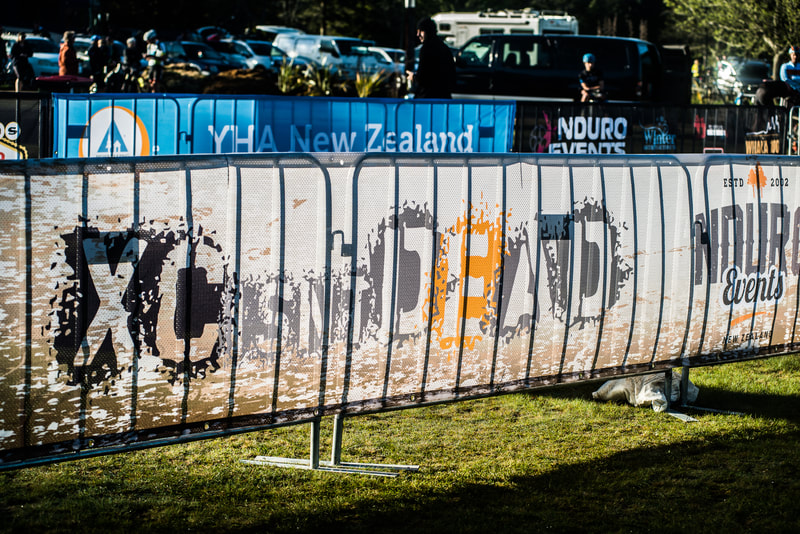 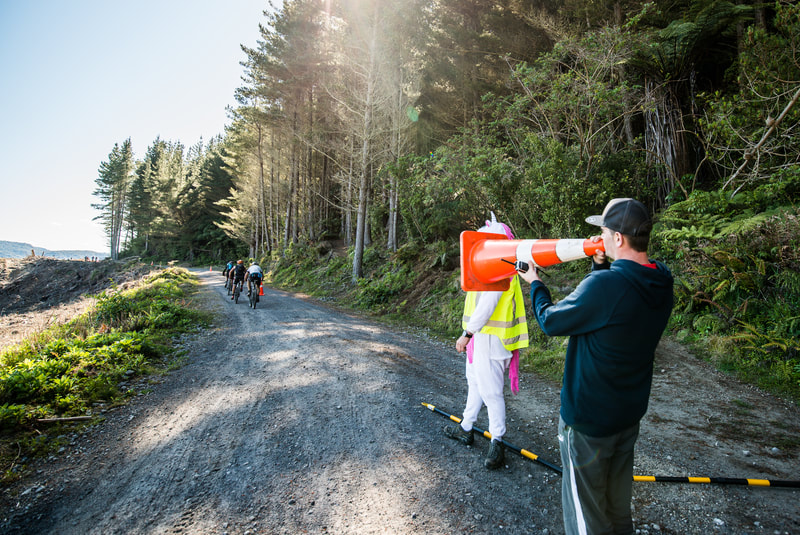 ​As the Whaka 100 developed in size, set-up and reputation - there was also a change in ownership. At the end of 2013, Tim and Belinda Farmer took over Nduro Events from Marcus Diprose and Rawiri Bhana. Tim had just returned from overseas competing in the WEMBO - World 24 Hour Solo Mountain Bike Championships and, after being persuaded to enter the Whaka100 five days later, took bronze in his age category and top 30 in the overall. Minus a hill climb-related meltdown or two, Tim became a Whaka 100 convert and when the opportunity to take over the event came a few weeks later, he and Belinda went all in. 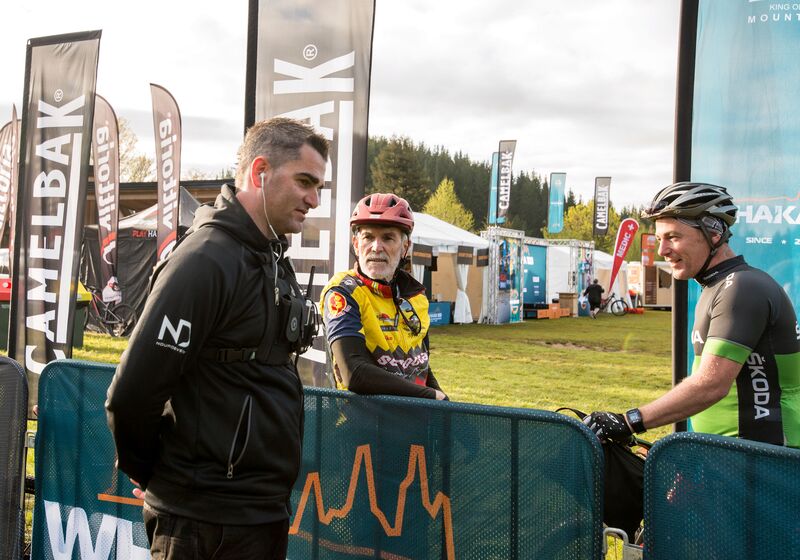 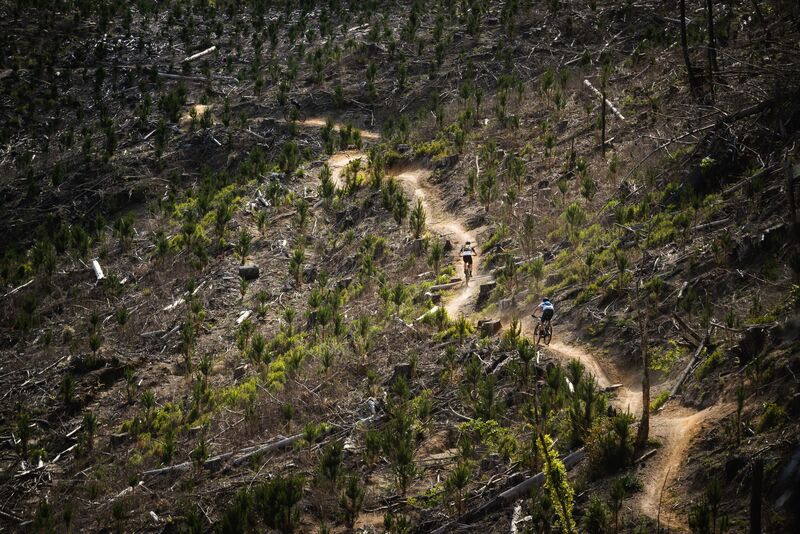 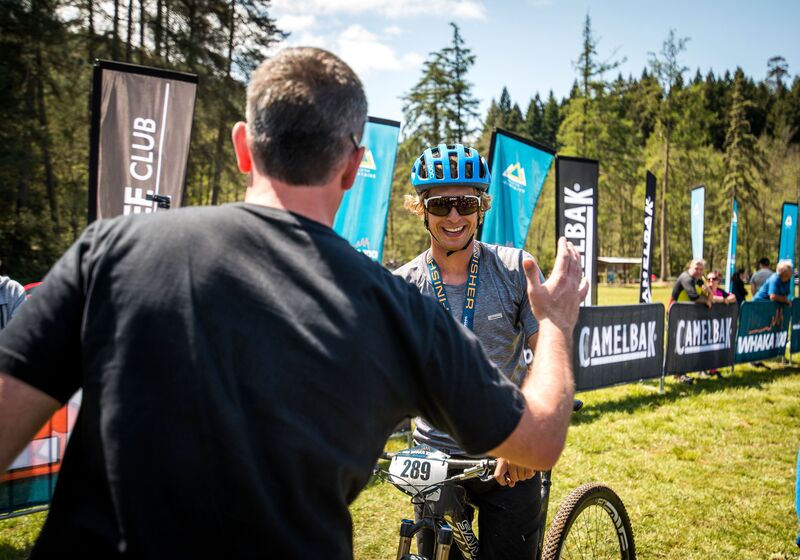 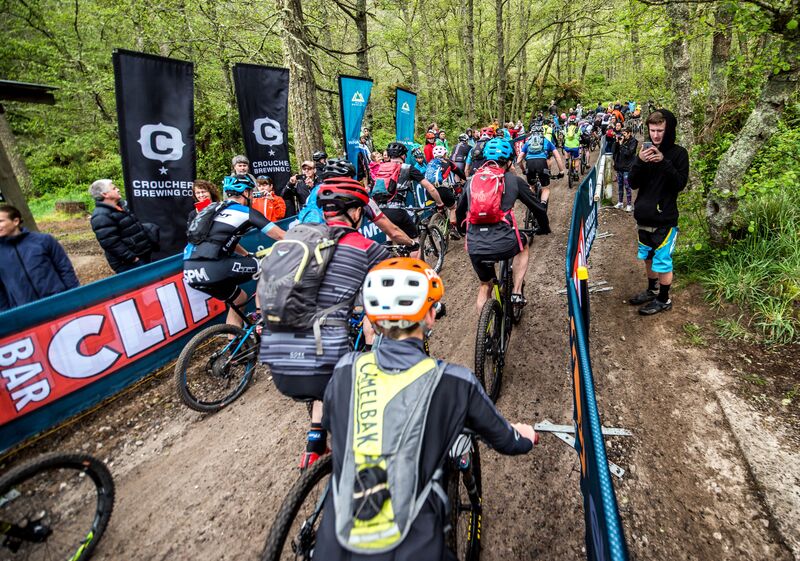 What makes the Whaka 100 special
The first ever Whaka 100 saw Nina Trass and Scott Thorne take the overall win and indeed, there have never been any international male or female All Time Champions - quite the feat by the New Zealand athletes!

Right from the start of the race, riders knew it was different. The original course was designed to filter riders into single track almost immediately (other events had forest roads to initially separate faster riders) meaning there was more competition for those front spots. Additionally, excluding one climb, all ascent was in the last 40% of the race - a tough surprise if you weren’t expecting it!
​
The event has seen it’s fair share of unique moments throughout the years. One particular Whaka 100 often mentioned is 2009 when GTs “Golden Bike” visited the Whaka 100. This bike was up for grabs across the amateur races - supporting those without team or manufacturer funding and was won by Anne Mortimer, NZ.

The Whaka 100 is special because the organisers aim to keep it tough and an unapologetically hard MTB event. However, from the beginning, the event was always about people who are mid-pack seeing if they could get out there and actually do it - whatever their starting fitness level. Combine this with optional distances, techy single track and steep descents, there truly is something for everyone. 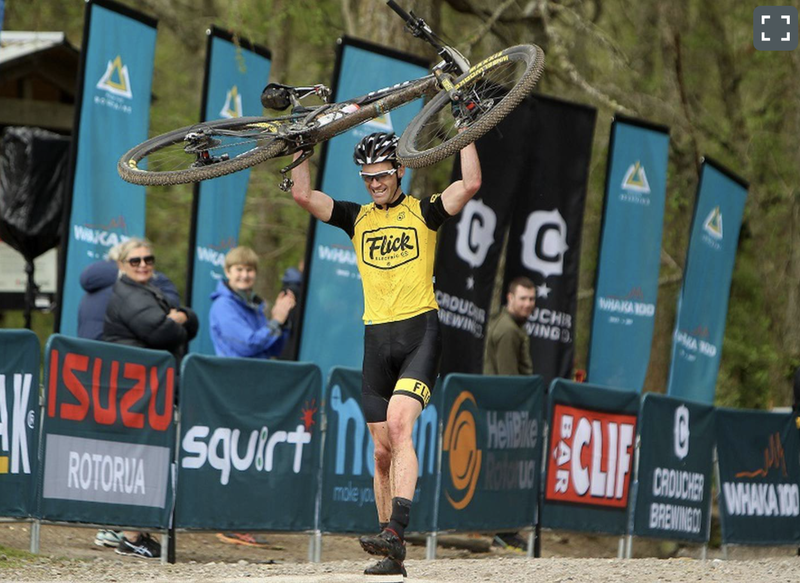 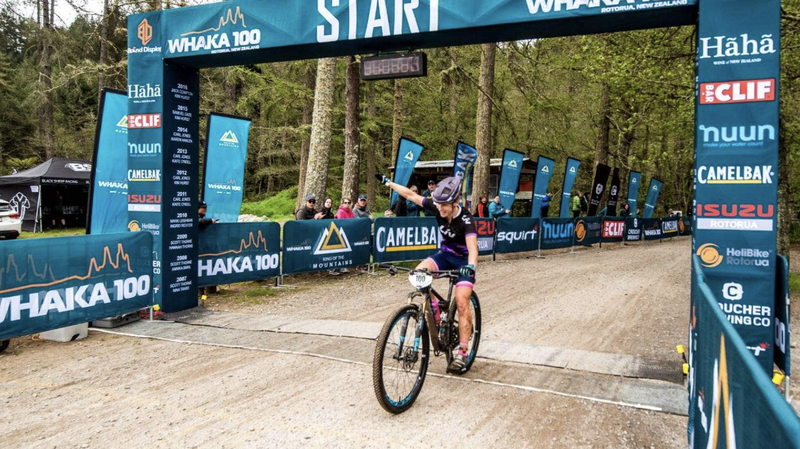 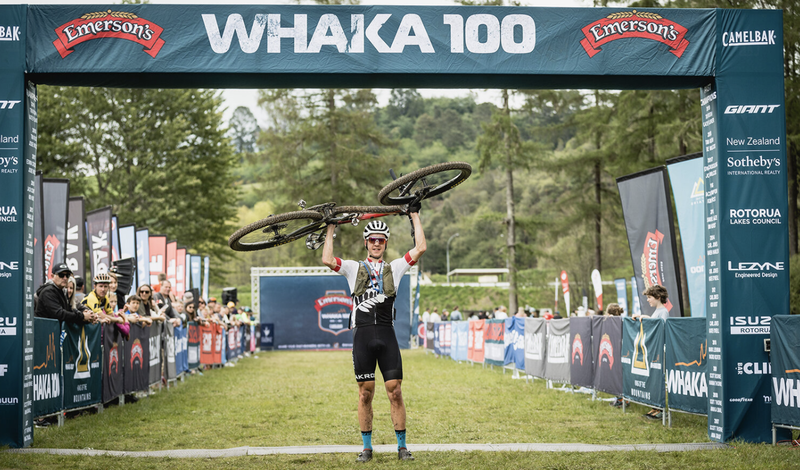 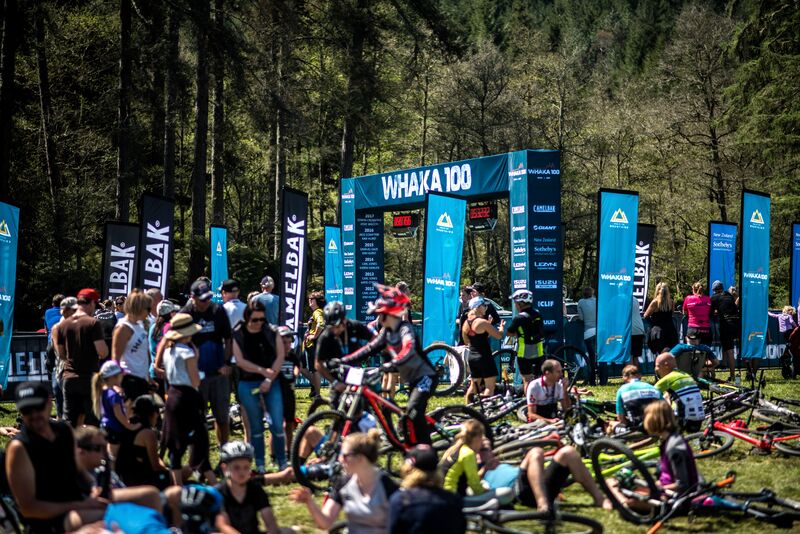 Tim and Belinda wanted to take the experience of racing overseas - the good vibes, event culture and structure - and create similar events in New Zealand. 2018 saw the introduction of kids races and the Shootout TT while 2018 saw E-bikers entering the Whaka 100 for the first time. From upgrading the finish line, improving course markings, and prizes to having the best support crew of volunteers, aid stations and on-site medics, they’ve taken the event to another level.

From the beginning, there has always been a competitive female elite field in the Whaka 100. In 2008, Annika Smail won the Female open, demolished the female records, and came 5th overall - an accomplishment stated by the event organisers at the time as absolutely amazing. This is also something Tim and Belinda are working hard to continue. From 2017, there has been a large focus on increasing female participation; 2018 seeing the introduction of a female only race. Female participation has now increased to 25% from only 3% initially. This continues to grow in line with male participation as entry numbers increase.

The Whaka 100 has developed into a weekend festival and not just a standalone event. There’s competitions, giveaways, live tracking technology, family events and the finish line vibes (and beer!) to make sure everyone wants to stay around to celebrate their race achievements.

With 201 entrants in the first year to over 3000 entrants in 2021, the evolution of the Whaka 100 has been huge and it will only continue to grow. The Whaka 100 welcomes everyone with open arms, from kids to new riders, elite riders and world champs, there really is something for everyone!

Here at Nduro Events, we’re all about respecting and honouring the land we walk, run, bike and event on. Nothing is more important than looking after our country and we’re working to put sustainability at the heart of what we do. ​

The area
It is important to us that we preserve, protect and build our natural resources and day by day, we’re learning how we can make improvements in all areas of our events.

This can be seen right down to the Whaka 100 logo. Through the three triangles of our logo, we portray the 3 significant peaks of the forest through our three triangles; Tawa, Moerangi and Tokorangi. Each triangle also represents equal value to event, participants and stakeholders.

We want to act as caregivers to the area as much as possible.
What we’re doing
Encouraging positive behaviour
One course, after the aid stations, we have our Shot Boxes, encouraging riders to discard their waste with a bit of fun by having a sign they can throw the trash at, which then drops into a bin for easier collection. We've made littering by participants grounds for immediate disqualification in our race rules.

Event consumables
Who doesn’t love finishing a tough event and being presented with that big shiny medal!? Well, ours are shiny AND are all made from recycled metals and recycled plastic bottles. Plus, our race plates are recyclable, meaning that (if you don’t want to hang it on your commemorative wall) it can still go to good use.

No-crap packs
Don’t you hate it when you go to an event and your race pack is full of leaflets that just end up in the bin? So do we. That’s why we work with our partners to give you useful, practical and long-lasting goodies. Plus - all our event details are now available through our free Whaka 100 mobile app - meaning you have all the info in your pocket without any of the leaflet hassle. ​

Looking for the best partners
We’re working with partners who also have their own sustainable programs. Whether it’s recycled product lines, ethical supply chains, or reusing energy to reduce emissions.

Giving back to the community
Rome wasn’t built in a day, and neither was the Whakarewarewa’s trail network. Our event generates a lot of traffic in the forest, which is why we use our event proceeds to donate back to the Rotorua Trails Trust, who maintain the cycling, walking and horse tracks you enjoy. Additionally, we enable participants to donate a little extra koha to trust as a thank you when booking their entry.

We also donate to the First Response Medical Unit, both on the day and through event proceeds ensuring they can keep everyone safe in the forest.

What you can do
Make your ‘using’ reusable
What can you change in your life (bonus points if it covers race-day too) that can move from single-use to multi-use? Water bottles, cups, wet-wipes, food containers - there’s loads to choose from so see what you can change for the better. This is something we’ve been focusing on in the Whaka 100 office and can now report all treats from the cake fairy appear in reusable boxes!

Think about your travel
Most of us need to travel sometimes - to work, on holidays, even to the supermarket. So what small changes can we make here? As well as the usual - could you walk to work a few times a day - of course we’re a huge advocate of using your bike to get around!
​
What about getting to our events? Can you car share to find fellow riders in your area also travelling for event weekend or training? Or if you’re flying, most providers now have carbon-offset programmes which help you, help the environment, as you fly!

Keep the trails clear
We all know there’s nothing worse than coming across a water bottle half way down a trail! So, as well as making sure your reusable bottle fits your drinks holder, make sure you take all litter with you as you’re going round the course. We've made littering by participants grounds for immediate disqualification in our race rules. The Whakarewarewa Forest doesn’t want your litter either! ​

A small, family run business, Nduro Events is a small team with big ambitions. We work hard to put on running and mountain biking events we'd love to take part in ourselves. When you get in touch, you're talking to real Rotorua locals who pour in everything to make your experience awesome. If you see us at an event, come say hello!

We have exciting paid and volunteer opportunities every year at the Whaka 100. Whether you're unable to ride this year, want to build your CV, or just enjoy wearing hi-vis and talking on a radio, check out whats available.
VOLUNTEER POSITIONS OPEN